I had been looking forward to Nightrider this year for some time. I have done it twice before, fundraising for JDRF both times but riding on my own the first time and with my friend Mike last year. This time would be different.

Kev, one of the Dads in a facebook support group for parents of children with Type 1 Diabetes, and a keen cyclist, had suggested to the Dads group that we should get a team together to ride as the Diabetes Dads. There was a lot of interest, from people like me who do plenty of cycling, albeit at a leisurely pace, to those like Vincent & Jason who didn't even have bikes when they agreed to do it. In the end, our team was 25 - mainly dads but also some friends who also wanted to show their support for the daily & relentless struggle by helping us raise awareness and funds for JDRF.

We met up around 7pm on Saturday and most of the group headed off to the Lahore Kebab House in Whitechapel for a pre-ride curry in one of London's oldest and largest Punjabi restaurants. Many of us were meeting people we had known on facebook for a long time for the first time in real life, and it was a really nice occasion. 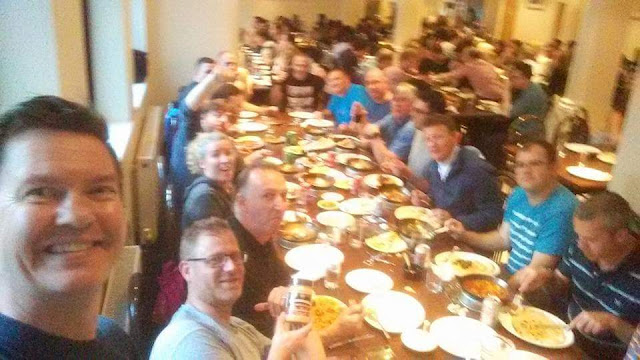 Here's a pic of me enjoying the lamb chops. Protein. Rice & naan also have carbs, so we were nutritionally on solid ground... 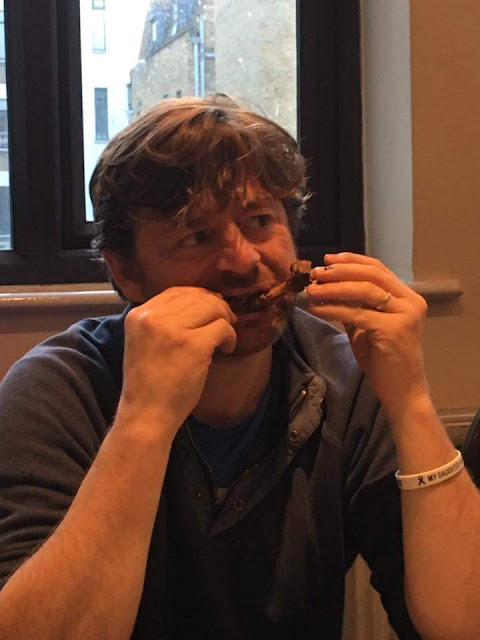 Following this, and starting to run a bit late but very relaxed about it, we headed back to Stratford International Car Park to change and get the bikes ready. Typically, after weeks of procrastination, my bloody wheel light didn't fit properly so I was rather gutted not to have the same fantastic images Kev had prepared whizzing round my back wheel. Next year.

Once we eventually left the car park to ride up to the start at the Velodrome, it was properly dark, and we cycled through the one bit of the route with no street lights, which I remembered from last year.

For reasons best known to themselves, Nightrider had decided to start everyone from the Velodrome, instead of the split starts of previous years on opposite sides of London - Crystal Palace was great for me...not to mention a mere 10 minute ride from home. What this led to was big queues to sign in at the start, then big queues at most of the rest stops, so I am not sure they would consider it an unqualified success, but it wasn't as big a balls ache as I had thought it would be (apart from the hour it took me to get 2 miles on the Blackwall Tunnel approach).

Luckily for us, Daniel's wife Julie was on hand at the start and worked some magic for us all to skip the queues to get signed in, so it was only about 25 minutes after the scheduled start that we took a team photo and rolled off to the start. There was a bit of faffing while the organisers held us back to try and let the AC/DC fans leaving the concert at the Olympic Stadium clear, then we were off - around the outdoor cycling track, back onto the road and away into the mysteries of North East London... 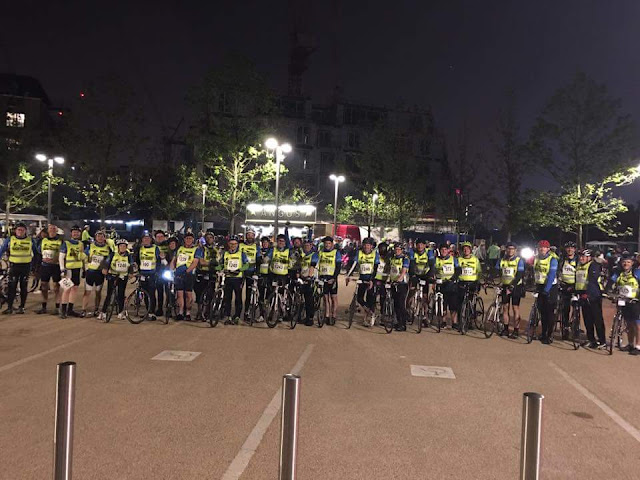 The route was very different this year, and not in a bad way. Ally Pally was gone but we still had a stiff climb up to Highgate via Dartmouth Park Road, once we had eventually found it...hilarious drunken folk moved a couple of the signs so we got a bit lost once or twice!

While the Diabetes Dads group had wanted to stay together as much as we could, traffic lights & junctions rather swiftly put paid to that, but we were never far from a bike with flashing wheels, and the groups formed and reformed into fluid groups, with plenty of chat, encouragement and high spirits.

The first break point was at the top of Highgate and we all reformed here before heading on up Hampstead Heath. This was the worst I felt all night - curry repeating on me, feeling a bit sick, but it passed and on we went. Spoiler alert - there is a sorry lack of misery & suffering in this blog this year - I have lost a lot of weight, had done some decent training rides, and felt reasonably fit all night! 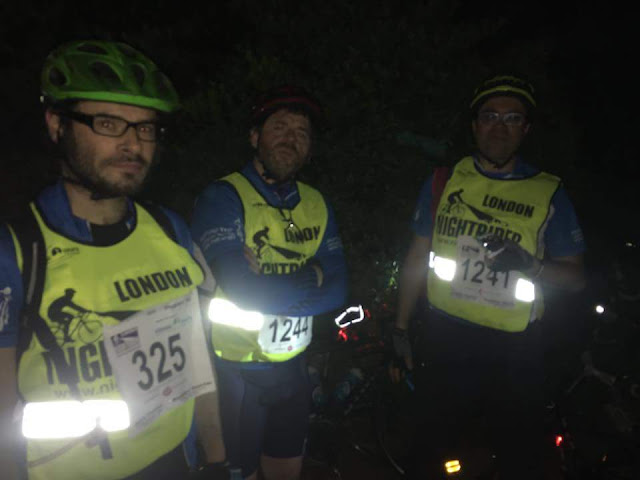 From Hampstead it was down towards St John's Wood and then we turned along the road past Little Venice - "you won't want to miss this" said the organisers...but it was dark! Doh! At the lights we met some other JDRF riders who turned out to be the 7 strong Zara's Zoomers, riding the 60km route. It was great to chat about our tweenie ten year olds for a while until the traffic lights did their thing again.

This was a change to the previous routes and we cycled up past Holland Park to Notting Hill, then down to Kensington, along past the Royal Albert Hall, past the museums, Sloane Square, Chelsea Barracks, and along Millbank to do a big loop south of the river which was mainly to bring us back over Westminster Bridge and off down Birdcage Walk, up the Mall and round to the ridiculously busy Piccadilly Circus! As usual, traffic jams, people everywhere, mad atmosphere! But the group managed to get split again...

It was now sometime after 3, and we were about halfway. The next section into the slowly lightening sky, was through Rotherhithe, Bermondsey and along to Greenwich. Some pissheads in a taxi gave us some abuse, the only time in 3 years I can remember anything. "Bike virgins" apparently. I laughed so hard my glasses fell off and had to be retrieved from under a car!

Feeling quite cold and stiffening up with every prolonged break, the group, which was now a manageable 6 of Darran, Luc, Daniel, Rory, Jason and myself, decided not to hang around and ride the remaining 30 or so kilometres to the end together. Dawn was breaking as we cycled along to Greenwich, though it was misty and quite chilly. The route took us all the way along to the O2 and then the penultimate bit of misery - Vanbrugh Hill up to Blackheath - which had the decency at least to be short and sharp!

From here it was across the heath then along to Lewisham, past the end of Rory's road in Ladywell and up the long long drag to Crystal Palace via Honor Oak Park and Sydenham Hill. Not easy at 5am after 5.5 hours on the road though.

Being 10 minutes from home had a certain irony, with 15 miles still to go, but we belted down College Road to a welcome pitstop in Dulwich College. A quick coffee and selfie later, we were back on the road, 12 miles left, sense of purpose renewed. 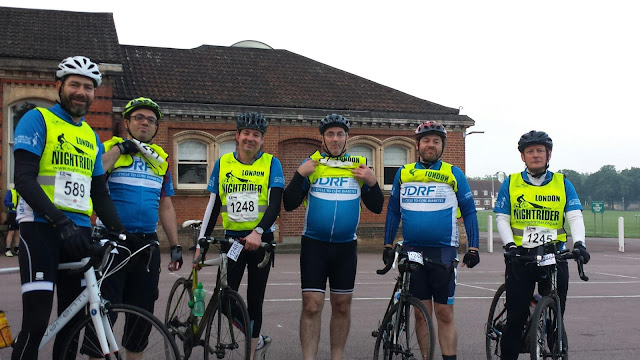 The ride back into town was punctuated with an attempted intervention for a lad who was passed out hammered on the pavement outside his house. He woke up and staggered off, tired & confused - we chuckled at the thought of him having flashbacks later to these blue and white angels offering him water! But with him behind us, it was back to Tower Bridge, through the cobbled streets of Wapping -  an enjoyably sadistic touch, then near to our curry house and back to Olympic Park, passing the almost suitably named Pancras Close on the way. Then, not long after 6am, we were finished!

Through the finish line and we posed for a picture - at which point the photographer clocked the JDRF tops, told us he was type 1 himself, and thanked us for doing it. Like Dan & Julie's daughter, who had emotionally waved us off earlier, he really appreciated our efforts - even though one night without kip to raise money for a cure for what our kids put up with 24/7/365 isn't so bad! I think I take it for granted sometimes that because I have a good support network, others do too - but it isn't always the case, and a lot of folk - both adults and kids - don't know anyone else with Type 1, so occasions like this mean a lot to them. I am just glad to be able to my bit and try to make a small difference to their lives. 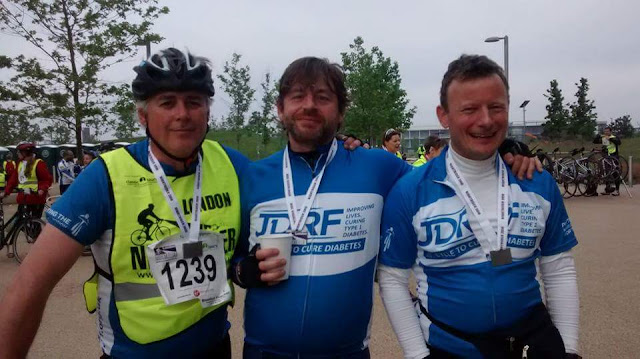 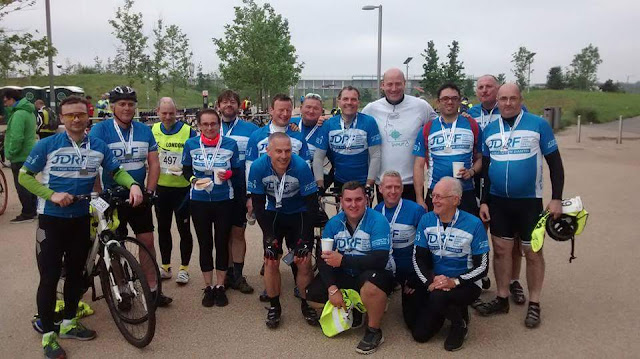 Photos done for now, we met some of the others who had finished and got in the queue for the deliciously welcome bacon sarnie and brew. Marvellous! Over the next 45 minutes the rest of the Diabetes Dads came over the line, to cheers & more photos. We all exchanged tall tales of our antics and eventually made our farewells and dragged ourselves away to go home. One last climb up to the 5th floor of the garage and we packed the cars, said goodbye again, and went our separate ways, already planning our next adventure...Paris!

I had a lovely welcome back at home and after a shower, parked the kids in front of the telly and attempted to sleep. Truth is though that I was still buzzing, as was my phone from all the updates in the CWD group on facebook! I managed a bit of sleep before H brought me back to earth, requiring my bum wiping services! Eventually gave up at about 1pm and took the kids to buy some supplies. Even caught the end of the Tour de Penge in the park, not having got back in time to ride it.

What a great night, with a great bunch of people. Huge shout outs to all the Diabetes Dads, and Zara's Zoomers, everyone doing it for JDRF, but special mention in particular to:

Kev, for organising us all to do this, running the fundraising page, the wheel lights, Lahore - and for rising from his sick bed of 4 days to make the journey to London from the South Coast to ride with us all. Legend.

Paul, for whom 100km overnight wasn't enough, so he also cycled to London from the Midlands over 2 days, just to up the ante. Legend.

Vincent, for his endless supply of bacon memes, good humour, doing it on a £70 bike from Tesco - and Baconnaise. Legend.

Luc & Jason who pretty much doubled their previous longest rides on the night itself. Legends.

The chap who fell off 3 times at lights,  then once more for luck as he crossed the finish - damn those cleats! You shall remain nameless but schadenfreude prevents me from not mentioning it...the cycling equivalent of the banana skin, and hopefully you weren't too bruised! You have to see the funny side ;-) Legend.

Huge thanks to all the team, everyone I rode with on the night, all the sponsorship & support. It is really appreciated - and currently at a fabulous £14,500! Adding in Zara's Zoomers, nearly £20,000! Just wow.

Sponsorship page is here if you missed it!

Until next year, hope is in a cure - and here's that man again:

EARTH has not anything to show more fair;
Dull would he be of soul who could pass by
A sight so touching in its majesty.
This city now doth like a garment wear
The beauty of the morning: silent, bare,
Ships, towers, domes, theatres, and temples lie
Open unto the fields, and to the sky,—
All bright and glittering in the smokeless air.
Never did sun more beautifully steep
In his first splendour valley, rock, or hill;
Ne'er saw I, never felt, a calm so deep!
The river glideth at his own sweet will:
Dear God! the very houses seem asleep;
And all that mighty heart is lying still!